How to Respond to the SOR

OK, you’ve received a Statement of Reasons, looking something like the image to the right, perhaps going on for a few pages, and you are asking yourself “How do I respond to this?”

Security clearance appeals are very fact driven. Even very good facts must be organized and presented clearly and persuasively to answer the concerns raised. 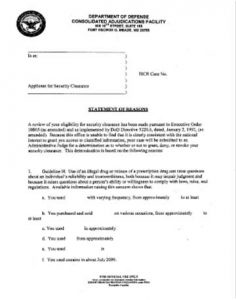 The first step is to admit or deny each fact claimed in the SOR. The SOR is typically written in numbered paragraphs so you can respond specifically to each charge. At most agencies, if you do not specifically answer each paragraph your response will be sent back for correction.

Responding to the Confused Charge

Sometimes a factual claim is party right but also partly wrong. Taking the above DUI example, suppose the month or city is wrong, or you were convicted of a different charge, or the case was dismissed after a period of keeping your nose clean.

Don’t split hairs, but do be accurate. Don’t admit to a partially wrong charge without clarifying what about it is wrong. Don’t deny a partially true charge without spelling out what part is true. Your response speaks to who you are. The focused and forthcoming answer says you are a straight shooter. Also,  look for brevity: a sentence beats a paragraph.

Support your Response to an SOR.

Some factual claims in an SOR simply cannot be resolved by a clarifying answer and demand further proceedings. An example could be a charge that you are in contact with relatives in a foreign country. If true, how often you speak with or write to them is usually not going to change the agency’s mind at the pre-hearing stage. In such instances you may want to provide some detail, but maybe not. Too much will confuse the reviewer. How much, and in what manner and when, should be discussed with a knowledgeable security clearance lawyer.

Focus on the Concerns Raised in the Statement of Reasons

A winning narrative response addresses the exact concerns raised in the SOR and when possible refutes or mitigate those concerns. What is the real concern?

What detail to add and when to add it, what proofs to produce and when to produce them are tactical decisions that should not be made in ignorance. Experienced security clearance lawyers understand how different review levels process information. what authority to affect the result resides at different levels of review, and how timing can affect outcomes.

Our location in the Washington, D.C, area leaves us close to DOHA headquarters and hearing rooms.